Yeah, yeah I know it's been two months since you last heard from me but I have been busy.

So where to start?

First off I had arrived at the decision that due to Myasthenia, the KTM 1090 Adventure R was simply too large and heavy for me. The lack of muscle strength MG causes had meant even manoeuvering it in and out of the garage was really difficult and I was in constant danger of dropping it. Riding was fine but every time I stopped I felt like I could drop it any moment, clearly something had to be done:

At first I started looking at the "middleweight" contenders, KTM 790/890 Adventure or Yamaha Tenere 700 were the obvious choices but were deemed not suitable for a couple of reasons. A) both were more expensive than what the 1090 could be reasonably sold for and I simply didn't have the spare cash available to make up the difference and B) the weight saving of less than 30kg was simply not enough to make a difference. Trying both they felt just as unwieldy as the 1090 when maneuvering.

So I started looking at the small adventure bike market and decided the following were contenders: 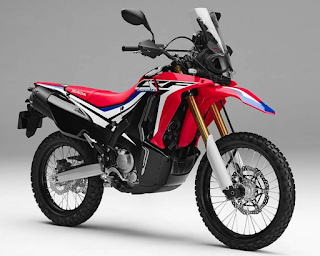 Or the replacement, Honda CRF 300 Rally 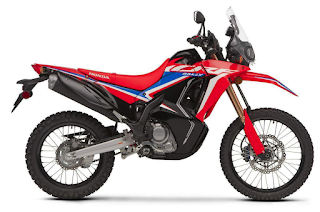 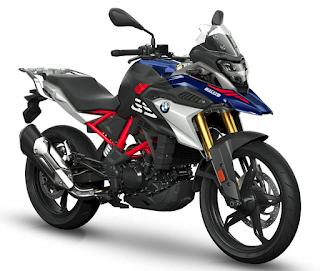 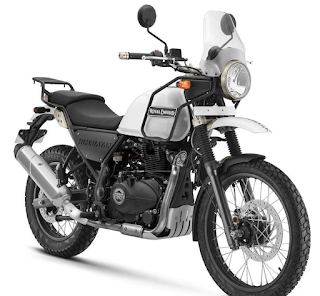 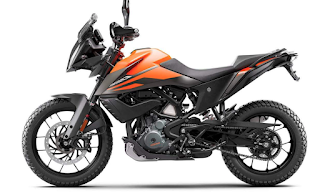 So a quick comparison showed:

As the CRF 250 Rally has been replaced by the 300, I would have to either buy second hand or find a dealer with old stock. But to be honest I rejected it because of its low power output (the lowest here) and its tall seat height. It is also more focussed as a trail bike with the "correct" 21"/18" wheel set up but as a result would be less suitable for road trips. In its favour was its light weight but this was not enough on its own.

The CRF 300 Rally is essentially the same bike but lighter, with more power and torque and a slightly lower seat but this wasn't enough of an improvement with only 4kg off the weight and an extra 4hp and 4.6Nm in its favour to make the grade. Additionally there are simply none available at present and I could have waited several months plus there would be no opportunity for a test ride as a result. I was actually offered a cancelled order (thanks George) but by then I had pretty much made my decision.

The BMW G310 GS is pretty much a known quantity as Gráinne has the road version, the G310 R. so i'm familiar with the engine but other factors were against it, the power was better but it was middle of the road in all categories. It also has 19"/17" cast alloy wheels that can limit tyre choice and ground clearance.

The Himalayan has the advantage of cheapest price and lowest seat but despite being the largest capacity at 411cc it has barely more power than the CRF250 Rally. Also the seat height is not so much of an advantage as having sat on one I found it too low and therefore too cramped for me. It does have a 21" front wheel but the 17" rear wheel limits tyre choice again. The other major factor is I simply don't like the look of them.

So that left the KTM 390 Adventure, this was well priced, a good weight, had the perfect seat height and available for both a demonstration ride and for sale. It also had the most power and torque of all the bikes. I was still a bit concerned about the 19"/17" cast alloy wheel combination but after riding one I was blown away, a fantastic little bike!

On top of the considerations above, was the cost of getting them ready for the trails. The Hondas are well known for their poor suspension and so I would have to budget to improve this but this would only be a few hundred pounds.

The BMW has cast wheels which are not ideal for trail riding and have fairly basic suspension but spoked wheels and suspension upgrades are available from Rally Raid Products but at a cost of £2036, bringing the overall price to £7191.

KTM have recently brought out a spoked wheel set for a quite reasonable £814* and the WP suspension needs no upgrading.

Next up was a Rallymoto training day on Salisbury Plain. Having cleaned the 1090 thoroughly, I was reluctant to take it and get it muddy. So Instead I travelled down in the van with the EXC in the back. Only to have it constantly cut out on me. Nothing I did would fix it and I've subsequently learnt it's almost certainly the pilot jet blocked by the fuel I left in it for over a year. This is apparently very common with unleaded containing ethanol. So a carburettor rebuild is on the cards. I ended up marshalling in the van.

After the Timber Woods Trial in April, the opportunity to enter the Peaky Boulders LDT in the Peak District came up. I decided this would be great to do given my knowledge of the Peaks, plus it would cover some common ground with the Edinburgh Trial.
On the day I drove up early but left the poorly EXC at home and took Gráinne's 250F Freeride instead. I was entered in the "Easy Route" class as it isn't on proper trials tyres and I'm glad I was.
After starting I soon arrived at the first section....    Or rather the queue for the first section. An hour later I finally got to the front of the queue, I had considered missing this and the next stage but there was no other way of getting out of the woods. the way we entered being down a steep and slippery slope and only wide enough for a single bike and of course very quickly clogged up with queuing bikes, so getting back up that way was not going to happen!
In the end I paddled my way through the first section that had no grip at all and guessed I had got away with a three but when the results came out it was maximum five (not sure how but that's life).
The second section was just as bad and I only got a couple of feet in before loosing all forward momentum, so I took a five, backed out and managed to work around the edge. The next section was nigh on impossible and that's the way it went, if this was the easy route I'm glad I wasn't on the hard route. This was full on trials, whereas you normally expect LDTs to be easier, a) due to the long distance and b) they are primarily aimed at trail bikes. I was surprised at the start to see many riders on pukka trials bikes, these are normally banned from LDTs or Classic Trials but it was clear this event was definitely geared towards them. I can only guess it was because this was the first running of this event by what I presume is a predominantly trials club.
After failing on almost every section, and ending up with bike on top of me on one stage, not to mention the constant rain. I threw in the towel at the first fuel stop (couldn't until I got there as I didn't have the range to get back)! I headed back via Hollinsclough for tea and cake at the church hall (well recommended).
Then I got a message from an Argentinian, living in Dunoon in Scotland with an offer on my bike, we haggled a bit and settled on a price we were both happy with and a deposit was paid.
He took the nine hour overnight train (and ferry) trip from Dunoon to pick up the bike the next Sunday. And then promptly rode the nine hour journey home again as he had to be at work on the Monday morning!!!
So off I went to the KTM Centre in Hemel Hempstead and a deal was made on an unregistered 2020 bike from stock, that I got for the 2020 price. A good deal when you consider KTM made no changes for 2021 other than the emissions control changing from Euro 4 to Euro 5 compliant.😀They also threw in the powerparts bash plate for free. I also ordered the spoked wheel set at a discount and with some half decent tyres, the whole package was under £6400. I also picked up a second hand Akrapovič silencer for around half price and when it arrived I would swear it had never been fitted to a bike. It's no louder than the stock silencer but much better looking and a lot lighter.

Since then, I've started a new job, spent a great four days at the ABR Festival as Clerk of the Course for the Adventure Trail and started to make a few changes to the bike but more on that next time....