In my last blog, I told the story of the rear brake pedal and how I managed to bend it in half after getting it stuck in the side of a rut on Salisbury Plain.

This was a result of the standard brake pedal sticking out a long way from the side of the bike and the foot plate on the end being very long too. So I started to look at how I could prevent this in future, now pay attention here comes the technical bit....

First I bent the pedal back to its original position as far as possible and then attempted to straighten it a bit more to tuck into the side of the bike by the simple expedient of clamping it in a bench vice, heating it up with a blow torch then getting a very large ring spanner over the lever and bending it as required. I also replaced the (very bent) original foot plate with one from a KTM EXC that is only half as big, this was a bit better but not perfect. 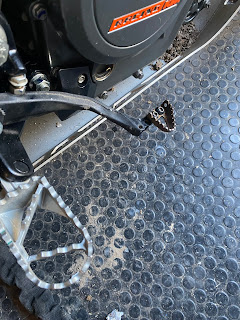 Next step was to find an alternative pedal that doesn’t stick out so far, I took a close look at the 790/890 pedal and it certainly looked like it might fit. Although the obvious issue was it mounts inside the frame, whereas the 390 pedal fits to the outside, so maybe it was just an optical illusion that it doesn't bend as far? The only way to find out was to get hold of one and try. 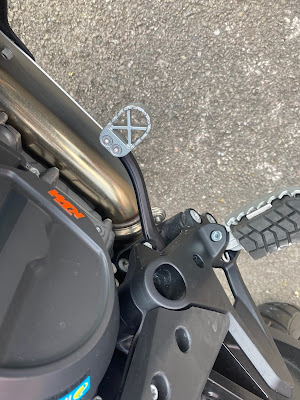 A bit too steep to start experimenting until I spotted a replacement 790 pedal on AliExpress for only £24 (with new user discount) so I thought it was worth a punt. It ended up costing me about £30 with postage but still not bad.
So it turned up eventually and a first look it seemed like everything was in the right place when comparing it to the original: 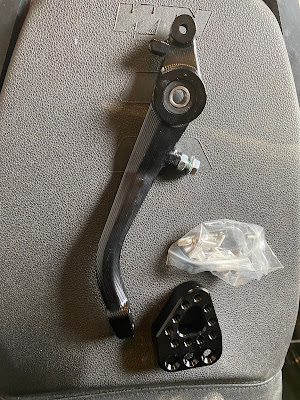 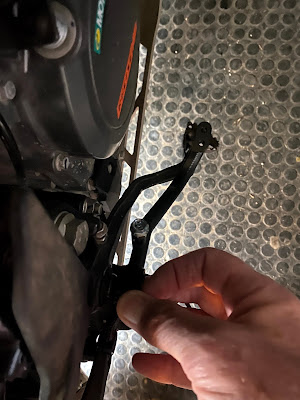 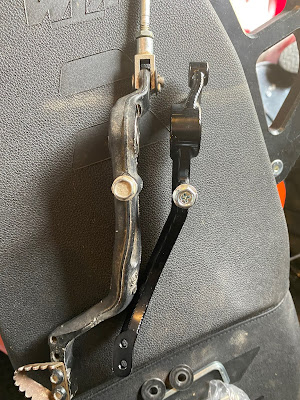 But then a few problems First problem is the part where the brake rod attaches is thicker on the 790 pedal.

This is because instead of a forked rod with a clevis pin that the 390 uses, the 790 has a rose joint that bolts to the side of the pedal. 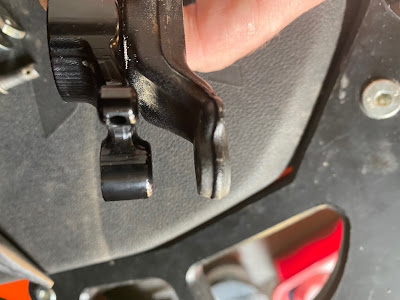 I considered stealing the rod from my 525EXC as it’s the same type as the 790 but realised it was quite different where it goes into the master cylinder. So instead I spent a few minutes with a file and reduced the width to match... 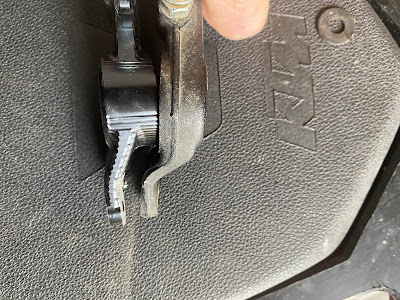 Then I tried to push the clevis pin through the hole and discovered it is both smaller and lacks the steel bush the 390 pedal has: 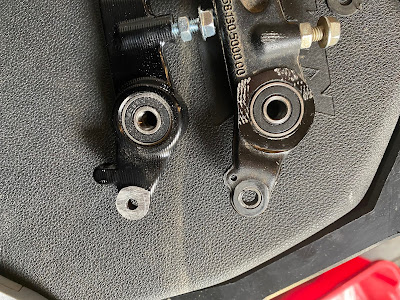 So I pressed out the sleeve (with two small sockets and the vice) Then drilled out the 790 pedal to almost big enough, then carefully finished it off with a round file until: 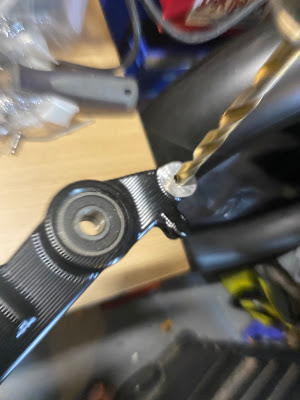 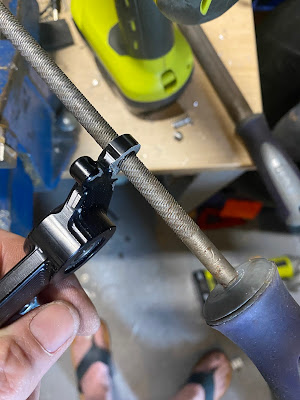 I was then able to press the steel bush into the new pedal with the vice... 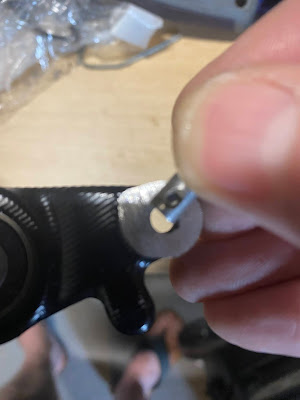 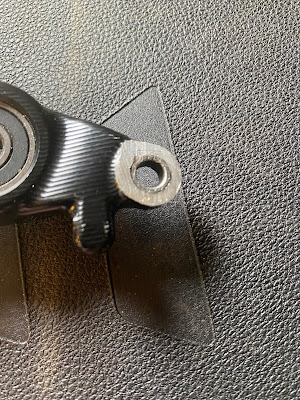 And it all fitted together as standard... 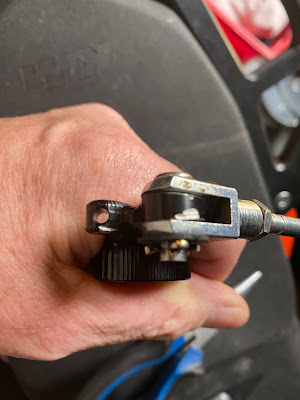 Another problem can be seen in the photo above, the hole for the return spring runs back to front, whereas on the original pedal it's from side to side. Not really an issue as I drilled another hole with a 2mm bit in the correct orientation.

Next issue was the thickness off the lever at the pivot, if you look at the 390 lever the bearing just pushes in from either side. But on the 790 it can only go in from the inside as it sits against a shoulder on the outside… 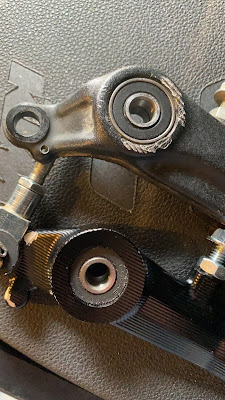 This means the pedal is thicker here and the unthreaded portion of the pivot bolt is not long enough and pinches the pedal up against the frame so it doesn't move. I cured this by finding a bolt with a slightly longer unthreaded section in my "box of spare bolts that must not be thrown away as they are bound to come in useful one day"
And so the final test, and everything seems to fit just right. The adjustment bolt, didn't quite line up but was enough to still work OK, I also fitted a footplate from a KTM 250F Freeride, even smaller than the old EXC one I used before. 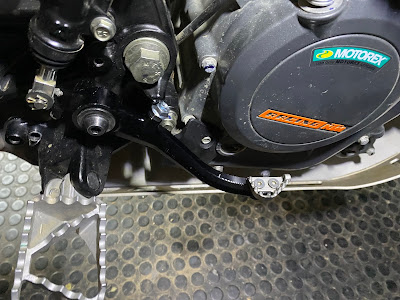 It certainly achieves the aim of tucking the lever in out of harm's way, especially when compared to the position of the original pedal (and remember the foot plate in the photo is from an EXC so still about half the size of the original: 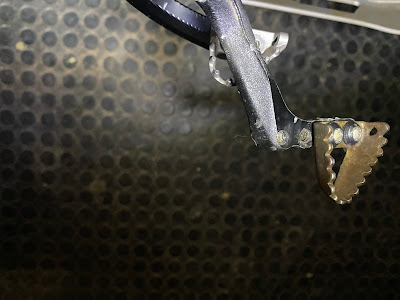 so all that remained was to road test it:
And this is when it all failed miserably as I found two problems both with the same cause:
Despite the brake actuating rod being adjusted to its shortest length, the brake pedal sits too high. This means you have to physically lift your foot to find the back brake, annoying and not ideal when off road.
Also due to this, in trying to get the pedal as low as possible, the travel of the pedal is extremely short, so the brake is effectively on or off, with hardly any travel between the two positions, not helped by the pedal being much shorter than the original so it was always going to travel through a shorter arc.
So it's now really good at locking the back brake due to a total lack of feel

As a result I have written off all the work done and I've reinstalled the standard pedal (now with the smaller 250F Freeride footplate).
The answer to these problems would be a shorter actuating rod, I looked again at the one on my 525 EXC to see if that would work but it's different, being fatter at the adjustment end due to having a threaded hole in it for a rose joint rather than being threaded itself like the 390, shame as they only cost £10.
Or I could buy another standard one and try cutting a longer thread for more adjustment and/or shortening it but wouldn't want to do that until I had a spare.
But the problem with that is the brake rod is not available as a separate part for the 390, only as part of the master cylinder (£93.66 each)

So it's time to start trawling through the KTM parts fiches to see what I can find.
The investigation continues.....
Posted by Tony Ferrari at 09:09 No comments: