Whatever the correct meaning or origin, 'farkle' has become the default phrase for adding accessories or changing parts on your motorcycle to improve the looks or performance.
So it seems I've been farkling, although to be honest my first changes on my new 390 Adventure were fairly mild....
First was to change the rather ugly standard mirrors for the Vicma folding mirrors I fit on all my bikes, these came straight off my 1090 Adventure R as I replaced the standard mirrors before selling it. 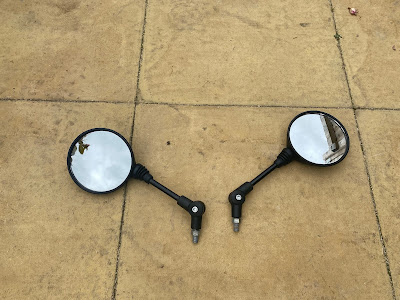 This was slightly frustrated by the fact that unlike other KTM's the 390 has a left hand thread on the left mirror! The Vicmas having conventional threads. So the right hand mirror went on OK and a thread converter was ordered for the left. Until it arrived I fitted a separate mirror clamp to attach the mirror as a temporary fix. 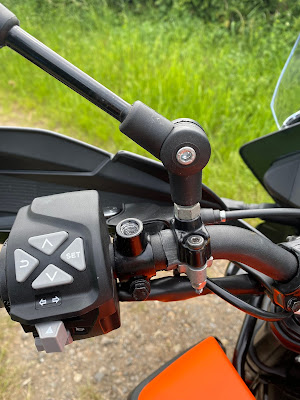 Much better looking than the originals, a better view and they fold easily for riding off road and conveniently for loading into the van, another benefit is they cause less wind buffeting than the standard mirrors, owners often change screens to try and sort this problem without realising the impact mirrors can have, the helmet they are wearing or even what jacket they wear. For me at 6' 1" the standard screen in its lowest of two positions is fine for me, in fact a lot better than my 1090. 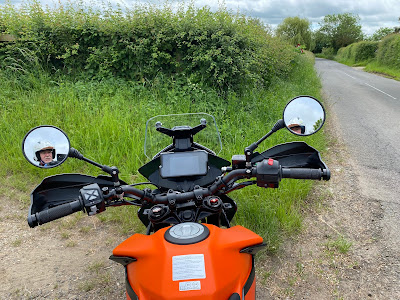 Next on the agenda was an Akrapovič Silencer, I picked this up second hand online for a much better price than new. But when it arrived, it might have well been brand new, the condition was perfect. A simple job followed of bolting it on. I have to say it doesn't make much difference to the sound but it is lighter than the original and looks far better in my opinion. 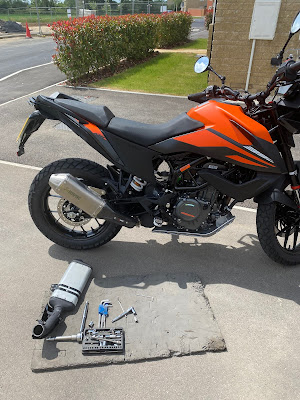 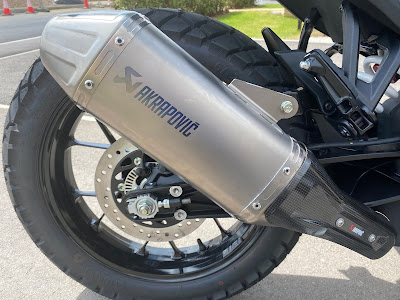 After this I mounted my Quadlock phone mount and anti vibration mount on the bars, although this proved a bit tricky as the 390 has very strange sized bars. Usually handlebars are 22mm diameter or 1" (25mm) on older bikes or more normally on KTMs they are 'fat bars' that taper from 22mm at the controls to 28.6mm in the centre.
The 390 bars also taper but only out to 26mm in the centre, a size I have never seen before. So none of the mounting spacers supplied by Quadlock fitted. I eventually found some plastic spacers in my spares box that fitted (I think they were originally for mounting auxiliary light clamps onto 25mm diameter crash bars). 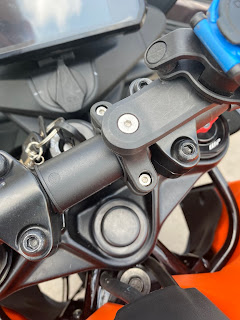 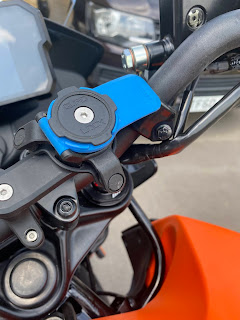