Imagine if you can a Wonderland... A place where dreams come true and anything is possible. And you have the setting for the most magical mad wedding celebration ever. Along side the Grand Union Canal, in the most beautiful garden full of sunken areas, hidden nooks and crannies, ponds and trees... wonderful things were about to happen. 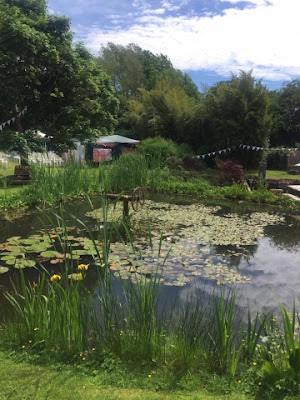 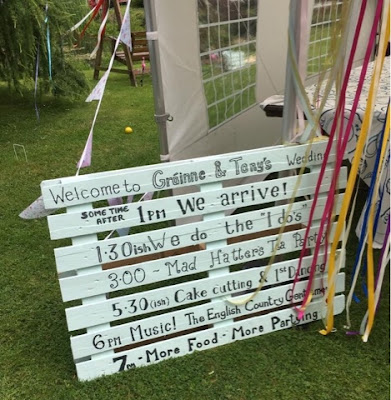 The prettiest marquee was decked out with pastel bunting and vintage tea cups... just waiting for the Mad Hatter and Alice to arrive! 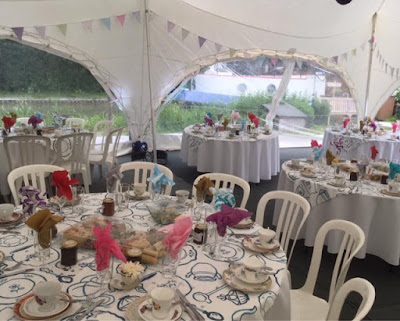 There were crazy signs... 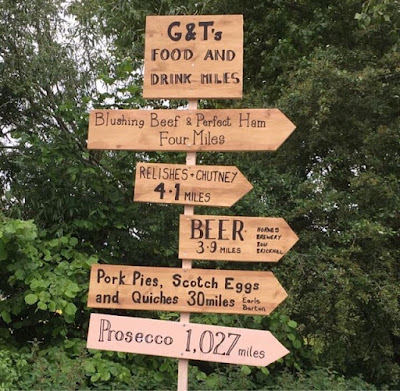 And flowers everywhere... the Gerberas even had googly eyes... of course! 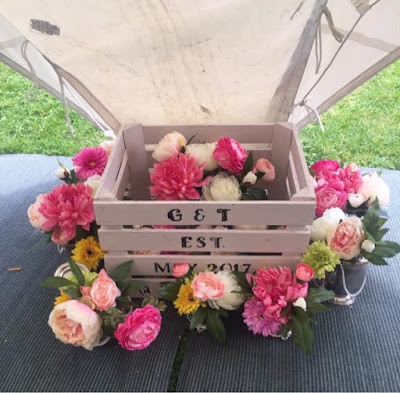 Gradually the guests began to arrive...
When the invitation says optional fancy dress my family only consider one option. My elsest son and his girlfriend pranced in like it was the most normal thing in the world to be dressed like flamingos. 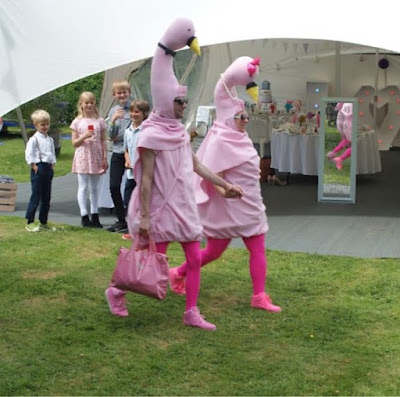 The youngest two and my Mum didn't do too bad either! 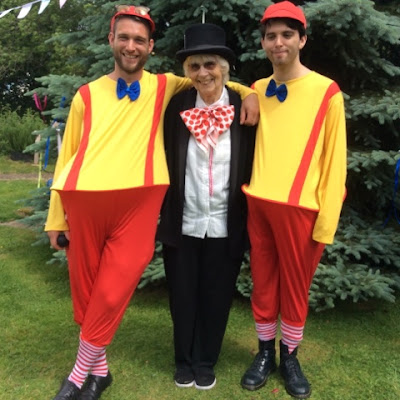 We dressed up, not in fancy dress but in matching "Alice in Wonderland" print outfits. 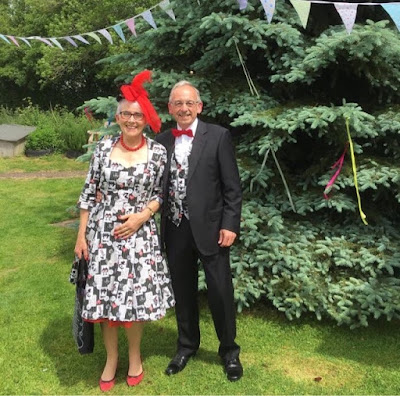 Then all of a sudden the music from " The Pirates of the Caribbean" film came over the loud speakers and sailing down the canal came my brother Tony and his new wife Grainne in true pirate style. 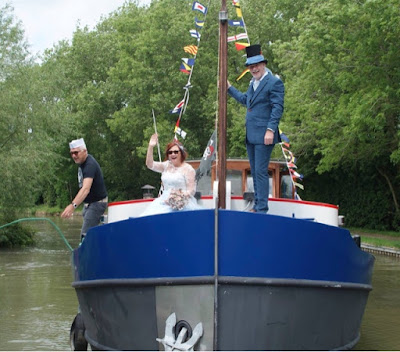 Accompanied by rapturous applause and laughter it was a magical moment. 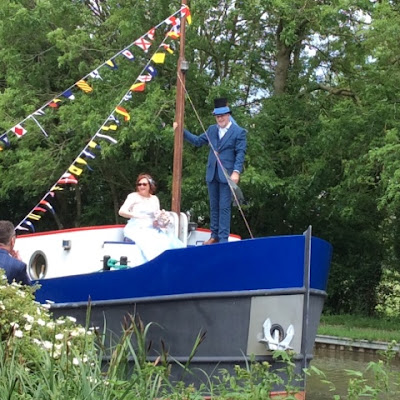 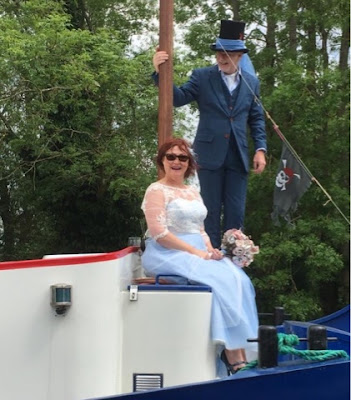 Once the couple were on land guests were invited to take their seats (flamingos in the back row so not to block anyone's view) and Tony was walked down the aisle by his new step daughter, looking very glamourous... 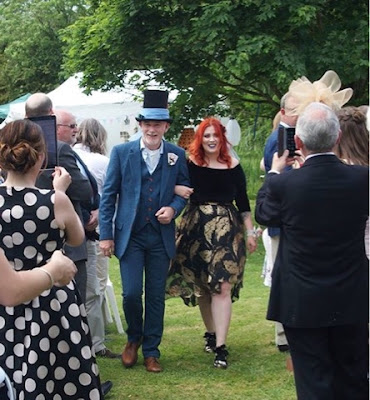 And Grainne was accompanied by her son, looking very happy and handsome. (Someone else was grappling with her hat which kept falling off!) 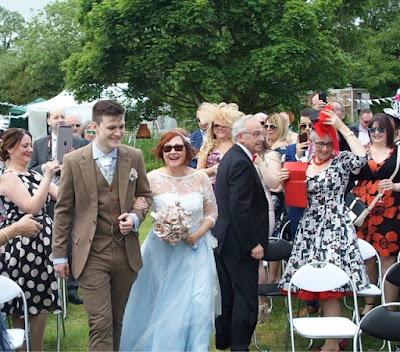 Readings were made, vows were read, rings were exchanged and it was all signed and sealed with the drinking of rum, overseen by a humanist celebrant. 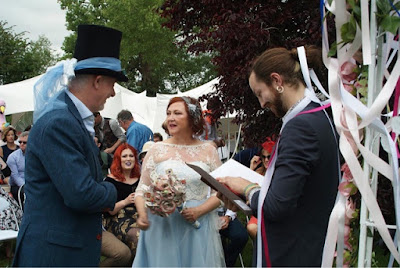 Grainne's bouquet was made from paper roses and vintage paying cards adorned with tiny teacups, hats, bottles and other miniature Alice paraphanalia. 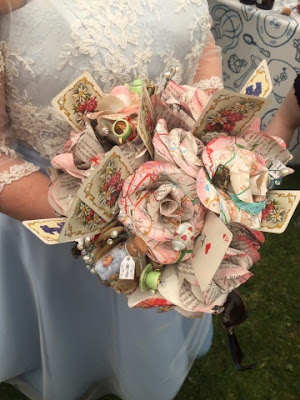 This was followed by a scrumptious afternoon tea party in true Mad Hatter style.
There were speeches and laughter and tears (of joy) 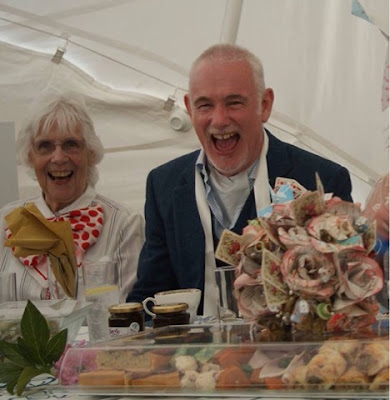 And some people even had room for a spot of cake... 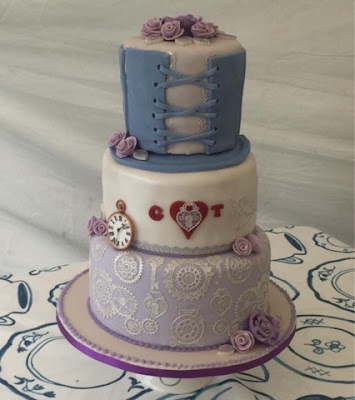 Of course it wouldn't be a party without some singing and dancing... the bride and groom setting the tone! 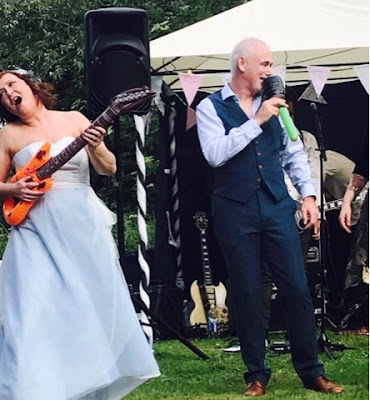 Someone else felt the need to join in (and yes, I was sober!) 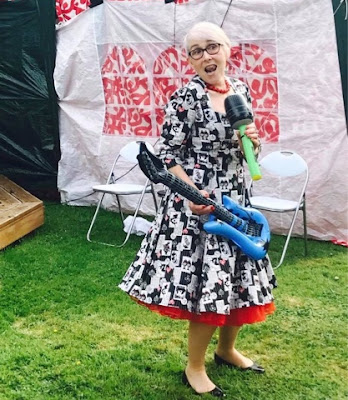 So much infectious joy, happiness, laughter, fun and love... the world could do with a lot more of this! 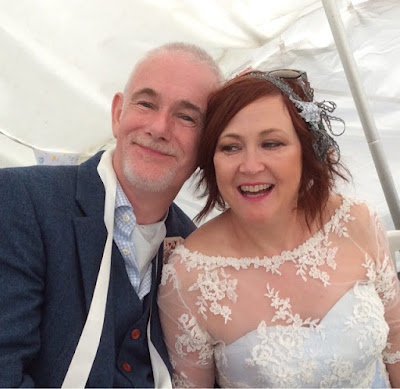