Normal Service has been resumed... sort of!

The latest lockdown having ended, I was released from house arrest (aka shielding) and sporting events were allowed again (and that includes motorcycling), it almost feels like the old normal.

But more on that later, for a start let's look at how my Youtube Channel Byway Nomad' is progressing.

Back in January I had 25 Subscribers, that has now doubled to 50 and views have more than doubled as have viewing hours. On the linked Facebook page, I have 139 followers, up from 100. So steady progress is the name of the game.

There are now 82 videos to view of green roads, mostly still in the Peak District

Check out the channel HERE

So what's been going on in the world of Motorsport?

Regular readers will recall my abject failure to compete in the Motor Cycling Club's Edinburgh Trial 2019. Well hopefully the trial will go ahead again in October this year and recently the club advertised for some volunteers to help with the organisation, so I held my hand up and I'm now Covid Compliance Officer for the trial.

Hopefully there will be a fairly easy requirement come October to stay Covid safe but we always have to plan for the worst. Since then I have also volunteered to write the route guide for the trial, so the first draft is nearly ready. Quite different from the road books i'm used to producing for Rallymoto events as rather than use symbols in the FIM format, it's basically just a written description; the pictures show the difference.

The other weekend I competed in my first event since the beginning of 2019! The Timber Woods Long Distance Trial held in Kent.
The EXC was dragged out from storage, treated to new oil, a clean air filter, new wheel bearings, new brake pads, a new air box cover (the last one fell off somewhere), new chain and sprockets, a new MOT and was taxed. Having removed the navigation tower and rally fairing I had fitted a headlamp from my old 690 Enduro with an LED bulb for night time events. Unfortunately a change in the MOT rules this year does not allow LED Bulbs to be retrofitted to headlamps designed for halogen bulbs. So a quick swap for a totally ineffective Acerbis enduro headlamp and mask (actually the truly awful one from my old CCM but OK as I will only riding it in the daytime for the time being). It did the job and it duly passed the MOT.
The road book for the event was published and was in a third variation of the genre; 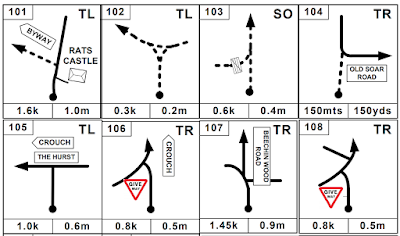 The LDT way of doing things
I Find this format really difficult to read on a bike as apart from being designed as an A4 page you have to go left to right then down a row, then left to right again, it just doesn't flow for me. So having spent a year plotting out the Stir Crazy Virtual Rallies for Rallymoto, I applied the same technique; Using the road book I plotted the route on OS Maps online. This produced a gpx file of the route that I then uploaded to the software we use: Rally Navigator and produced my own road book in Rallymoto style:
This had the advantage of being easier to follow for me, gave me cumulative distance readings from the start; the standard LDT format only giving distance between waypoints meaning you have to either keep resetting your trip meter or doing lots of mental arithmetic on the fly. I also discovered the distances were quite different and as it turned out, to be more accurate on my version. To top it all it now fitted into a Rallymoto manual road book holder.
So how did the event go?
The thing that attracted me to this event was it started at Canada Heights, the Motocross circuit near to Swanley in Kent. This being only five minutes away from my Brother and Sister-In-Laws house in Farningham. But of course Covid restrictions at the time meant we couldn't stay. No problem as we camped out on their drive in the VW. It was a cold night but we stayed nice and warm under the duvet but decided the mattress we use in the van (from an old futon) has seen better days, definitely not the most comfortable night!
The next morning saw a frost and the bike did it's normal trick of not wanting to start on the button (it's never liked the cold) but I was able to kick start it easily. Setting off for Canada Heights and it wasn't happy, running very rough; it wouldn't tick over and kept stalling and the starter wasn't having any of it. So I resigned myself to a day of kickstarting (never much fun with a 510cc single). Arriving at the start seemed to confuse some of the officials when I asked where to park the bike? "By your van" was the answer, I had to patiently explain three times I had ridden there and my van was about 3 miles away!
After getting my numbers and a programme I attempted to get the bike running better but despite turning up the tickover, It still wasn't happy. I eventually started the trial at my allotted time and the first section was straight down an extremely steep slope and through some trees. Typically the bike stalled as I went over the edge, with no electric start and a surface too loose for a bump start, I had only one choice: clutch in and coast through the section with a dead engine.
Remarkably it worked, maintaining enough momentum to wiggle through the trees and I got a "clean" with no penalty points.
I started the bike and headed off to section two, only to find I was at section three! A quick backtrack and discovered I should have turn left not right out of section one... doh!
Section two was the opposite of number one, a climb back up the steep slope, with a few tight turns around trees. I thought I had cleaned this one too, having one 'dab' of my foot as I exited over the lip of the slope. I was convinced I had done this outside the section but obviously not and I scored 1 penalty point, still not too shabby.
Back to section three and I failed miserably getting the maximum five points when I ground to a halt mid section. This then started a pattern, as I cleaned the next section (four) and got a five on section five when I missed a turn round a tree, then cleaned section six. The route then left the grounds of Canada Heights and headed off on minor roads and byways for a 90 mile loop around Kent, with occasional forays into Greater London, albeit a pretty rural part. After a couple of tricky sections we reached a petrol station so I pulled in to refuel. Shortly afterwards the bike started to run much better and I realised the previous fuel had been sat in the bike for eighteen months so had clearly 'gone off'.
The sections seemed to fall into two distinct types. The first very easy for me, resulting in a clean or a few where a single dab resulted in a single penalty point. The second type very hard which produced a maximum five penalty points as I failed to negotiate steep banks or tight turns around trees and often ground to a halt. Although a couple where I thought I had scored five, I was awarded threes instead but I think the observers were just being generous to my rather pathetic efforts.
I remembered why I like classic trials like the MCC events better where observed sections are hill climbs with a completely different scoring system (0 to 12 penalty points dependent on how far you get up the hill, the penalties reducing as you climb).
At around halfway I met up with Grainne, having lunch in a pub garden beside the route with her Sister in Law and nephews, I had to settle for a sausage bap and a cup of tea in an old quarry at the trial's lunch stop. 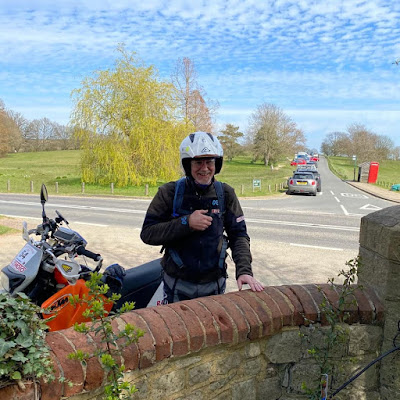 By the end of the day I was truly sick of kick starting the bike, the oil seal on the kick start shaft had failed coating me and the bike in oil and the fatigue from Myasthenia was kicking in big time, I was glad to arrive back at Canada Heights where we had to ride the first six sections in reverse. This was a near repeat of the morning when I scored 5 then 0 then 5 then another 0 another 5, and finally another 0. Gladly the engine decided to work on the last section as the extremely steep descent was now of course an extremely steep ascent.
Finally there was a timed special test included as a tie breaker, this involved riding over a series of railway sleepers, a slalom through cones and a see-saw. The cones were my failing as I simply didn't have enough lock to get round, the other obstacles being no issue at all.
So what was the result?
Well the good news is I came Second in my class (Class C for bikes over 450cc), the bad news is there were only two in my class!
I came 82nd overall out of 88 finishers, so at least I wasn't last 😂
Remember my plans for World Domination in Classic & Long Distance Trials?
Maybe not today.....
Or maybe never 😊