After the mud had been washed off after the ABR Festival, I made a few more minor adjustments. 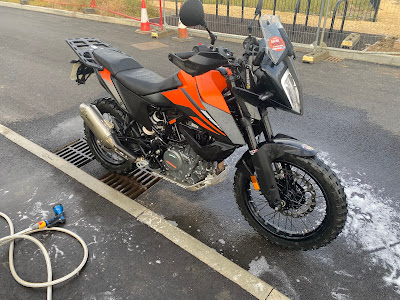 First was getting rid of the ridiculously long reflector bracket behind the number plate. At first I had just turned the reflector upside down which raised it a bit. 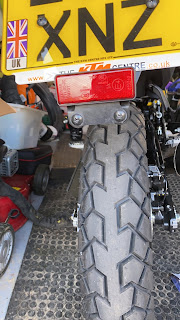 Later I crafted a plastic bracket from some 2mm plastic plate to position the redlecter right at the bottom of the number plate and did away with large moulded bracket altogether.

At the ABR festival I had picked up a new rack for the bike made from HDPE by French company AXP from Ollie Crowie at WrenchRide, very simple to fit and perfect for my purposes. 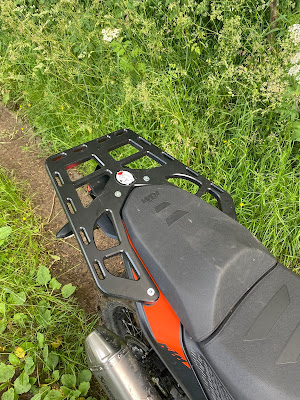 I then had a pleasant day out adding more miles as I had the 1000km (620 mile) service booked, this entailed just going out and getting lost, I discovered a few new byways and filmed them for the Byway Nomad channel, one each in Buckinghamshire, Oxfordshire and Northamptonshire (living as I do right on the border of the three counties).

In fact, I rode more than that having included several I knew but unfortunately hadn’t quite got the hang of my new camera (a £30 knock off of a GoPro) so several of the videos were unusable, or I simply had managed to turn the camera off instead of on! Oh well at least I had an excuse to go and ride them again a week later! You can check them out at Byway Nomad 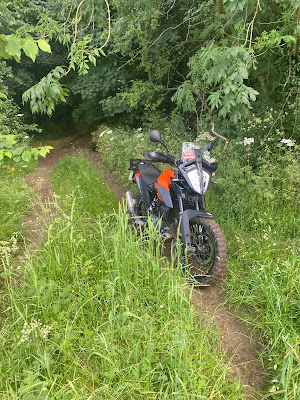 The next week  I took my bike in for its service in the back of the van as I also took along Gráinne’s KTM 250F Freeride as we had a plan! Gráinne had decided that rather than have both a trail bike and a road bike, a 390 Adventure (with a lowering kit) would replace them both. I was somewhat disappointed on arrival to discover the KTM Centre had no more 390s in stock and were unlikely to get anymore until the 2022 models started to arrive later in the year. This appeared to be the situation across the country as the model had proven so popular.

Luckily as there was no stock to be had in the UK, KTM were prepared to allow the KTM Centre to sell their demonstrator, so a deal was done and the Freeride part exchanged for the demo bike. It still only had 370 miles on the clock and the first 110 of those were done by me!

This is the bike.. 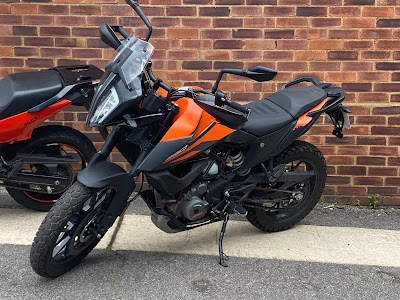 At the time of writing we are still waiting for the lowering kit to arrive but the bike is safely ensconced in the KTM Centre, no longer available as a demo bike.
The next outing on my 390 was an Rallymoto training day on Salisbury Plain followed the next day by an Adventure Rally on the Plain. Saturday was fine with classroom sessions and a couple of short roadbook outings.
On Sunday, I was to be the course opener and all was going well until I entered a lane near the 'German Village' in the Salisbury Plain Training Area (SPTA), this was badly rutted from the passage of military vehicles and I caught the brake pedal in the side of the rut and next thing I knew I was on my side!
Luckily the only damage was to the pedal and the mount for the black plastic radiator shroud. The latter was easily pushed back into shape but I definitely need to get some crash bars as it could easily have been the radiator that got damaged.
The brake pedal was a different story...

Whoops!
I was able to straighten it a bit but for the rest of the day had to use my heel to brake, that was fun on wet chalk!
The saga of trying to resolve the pedal issue will be the subject of the next episode of the blog.
One good thing was i got this cracking photo of me on the 390 from Gabby our photographer. 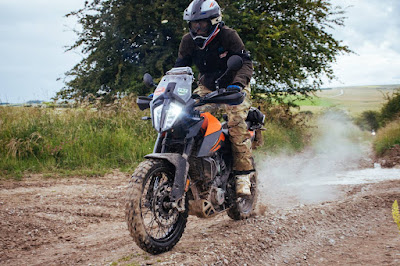