The blog is back!

Well you might expect something on Covid-19 but that'll have to wait after a bit of catch up....

After my failed attempt at the Edinburgh Trial last October, things have been relatively quiet on the bike front.

A trip to the Lakes District later in October on the KTM 1090 R for the next Rallymoto Adventure Cannonball turned out pretty wet! Unfortunately we only had 6 competitors turn up but everyone agreed that despite the weather, it was a great event. The ride home down the M6/M1 was less than pleasant as although the rain eventually stopped, it was cold and traffic was awful. 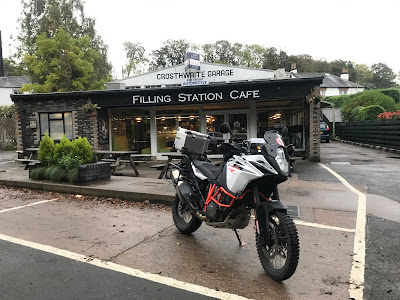 Plans then turned to future events and a decision on whether to continue to use the KTM 450 EXC or not. Given that I can no longer enter Rallies in the UK due to my heart attack but can still have a trials licence, it might be time to convert it from rally trim and make it more suitable for Long Distance Trials.

I had already fitted Pirelli MT43 Trials tyres and lowered the suspension slightly by sliding the forks up through the yokes and reducing the preload on the rear spring. So what else to do? 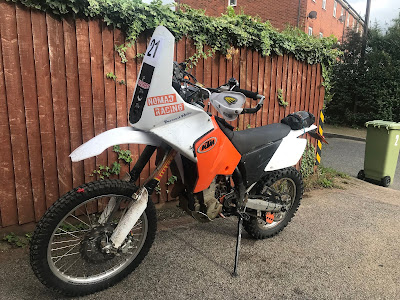 First step was to remove the navigation tower and fairing. These to make the bike lighter, improve visibility and hopefully a bit more maneuverable. Obviously this also means losing the lights, but as my experience on the Edinburgh showed me they are bright but the beam pattern is not ideal. Also removed as a result are the road book holder and ICO trip meter but more on that later. 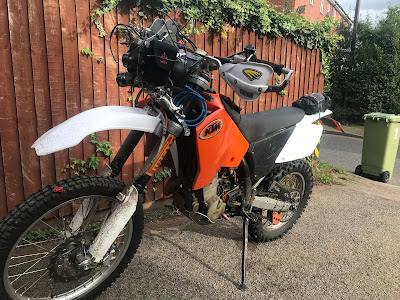 I decided to leave the mounting block bolted to the headstock on the basis it would make it easier to restore the navigation tower if I wished to do so in future and removing it does mean having to strip out the forks and yokes, which is a fairly involved process.

This causes a problem as the obvious next step is to restore the standard headlight cowl but this fouls on the mounting block. In the past I have used the headlight cowl from my old CCM as it offers more clearance but both of these set ups suffer from having woefully inadequate lights, something I wanted to address.

The answer presented itself from the spares box in the shape of a headlamp cowl from my old KTM 690 Enduro. Which has a halogen headlamp, it too fouls the mounting block but I had a solution in mind for that. It also has the advantage of already being fitted with the short KTM accessory windscreen 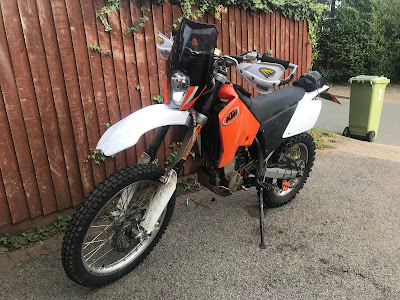 Another issue is that it has a 55/60w halogen bulb which is a bit too much for the EXCs electrical system. I had learnt this with my original light set up in the fairing that used two 55w halogen lamps and had necessitated the fitting of the 30w LED lamps to stop the battery constantly going flat. This did however allow me to experiment with different bulbs to reduce the electrical load whilst still increasing light output.

First experiment was with a H4 HID (High Intensity Discharge) bulb, this seemed to work OK and it certainly produced a very impressive bright, white light. It also has the advantage of requiring much less power than a halogen and doesn’t have a great impact on the beam pattern. Unfortunately it suffered from a ‘flicker’ on both dip and main beam, although I suspect this might have been as a result of the battery being low, definitely more testing needed there.

The second experiment was using an LED bulb, again these are very bright but due to the way they produce light can have a significant impact on the beam pattern. Fortunately the effect is not too bad and it has certainly improved the lighting. Another issue with the LED bulb is the large ballast with cooling fins on the back of the bulb. This absolutely fouls on the mounting block so a solution needed to be engineered. 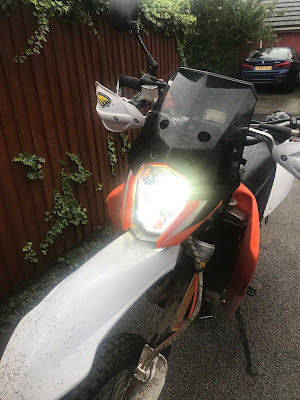 This was achieved with two 4mm aluminium plates cut to shape and mounted each side of the forks and another on the base to use the standard mounting pegs to push the headlamp cowl forward. Currently mounted to the forks with cable ties, the plan is to adapt the rubber straps from the standard light. 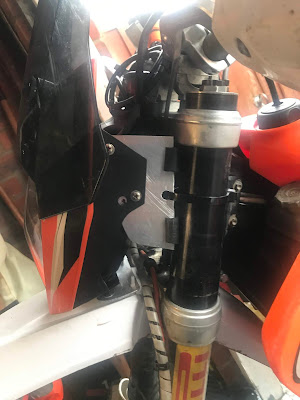 Next plan is to build a small dash panel on top of the cowl, firstly to block the backwash of light from the headlamp but also to allow the fitting of a fuse box, switches and power socket. 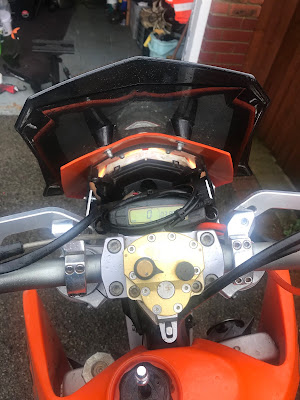 So how to address the lack of road book holder and trip meter? This came from my friend Andy on the Edinburgh Trial. He had simply used the road book to work out the route and create a GPX file that could be uploaded onto his Garmin Montana GPS. So no need for the road book holder or trip meter at all and with the added bonus that by using the powered mount the GPS is lit up and so clearly visible at night and takes up much less space on the handlebars too.

In its new set up I used the 450 to recce the Northamptonshire Adventure Cannonball that took place in November. It performed really well and without the rally fairing feels so much lighter and nimbler on the lanes! 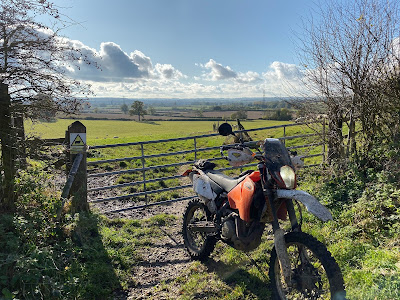 The Northamptonshire Adventure Cannonball was also beset by rain which made conditions on some of the lanes "interesting"! But numbers were much improved with over 20 competitors turning up on the day.

After this the bikes went into storage ready for our move of house to Oxfordshire.

The move went well in January and we have almost finished unpacking!

So far I have only retrieved one bike, my 1090 R, so used this in January to ride to the Peak District for the next Adventure Cannonball. This was an "extreme" designed for enduro bikes rather than the big adventure bikes. Although I did create a slightly modified road book for anyone crazy enough to bring a big bike along!

This was nearly too well attended with a glitch on the website causing two separate entry forms and at one stage it looked like we might have 60 riders turn up! In the event we had 34 riders turn up to the Old Smithy Tea Room in Monyash and needless to say it rained again! 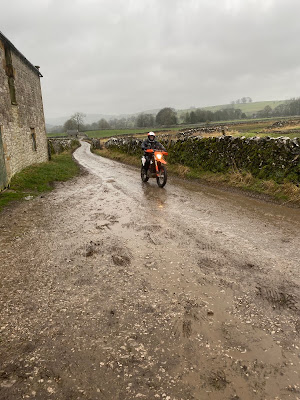 Overall it went well with only one unfortunate accident when my friend Michael forgot he was riding back in the UK and hit a car whilst on the wrong side of the road causing significant damage to the front end including a flat tyre! Luckily he walked away with just bruises; the AA got the car mobile with the spare wheel and plenty of cable ties! We recovered Michael to the cafe along with his bike that unfortunately didn't fare too well with a large chunk taken out of the swing arm!!!

Another cold, wet ride home which wasn't helped by the side stand cut out switch failing again (although I was able to rectify that after cleaning mud from it), the battery in my intercom died, so no music on the journey, my phone (that I was using for navigation as I'd never ridden from the Peaks to our new house before) wouldn't charge as it got water into the charging port. NB: newer iPhones may be waterproof but not if you want to charge them. So the battery in that died and I had to navigate round the M6 toll near Litchfield (no easy task) as best I could. And to add insult to injury my heated jacket stopped working after I stopped for fuel, forgot to unplug it and pulled the wires apart as I got off the bike!!!
I got home, bored, cold and slightly damp (although to be honest the waterproofs worked as they should).

Apart from a few rides to work one day, the bike has remained in the garage since, although I did eventually get round to cleaning it!

Since then I have been involved in getting ready for the next big projects, writing the Safety Plan and Risk Assessment for the Kielder 500 in March and starting the arrangements for my role as Clerk of the Course at the Adventure Bike Rider Festival in the Summer, although this is where Coronavirus has thrown a spanner in the works, that i'll cover next time.