Leaving straight from work on the Friday evening, I drove straight to the finish point for the trial, the Duke of York at Pomeroy where I had arranged to leave the van. Arriving shortly after seven o’clock I booked in as I'd paid for overnight parking on the adjacent camp site and went to park.
I immediately had a sense of déjà vu from the ABR Festival as I was directed to a hard standing next door to my friend Andy. We both unloaded bikes and Andy decided it would be a good idea to check if his bike started OK. It wouldn't on the electric start but did on the kick start. I did the same and mine started on the button no problem.

I decided to go back into the pub for dinner and Andy decided to have a kip in his car, with a request for me to wake him at 9:30 if he wasn’t already up.
After dinner where I shared a table with a former car competitor who had driven all the way from Aberdeen to work on the control at Carsington Water (that’s dedication) I returned to find Andy already up.

We had decided to head down to the start at about 10:00 o’clock. My start was at 00:21 and as it was about a 1 hour 15 minute ride down to Tamworth I’d have plenty of time, Andy wasn’t off until 01:55 so had an even more time to spare. So we got kitted up ready to leave.
And then my bike wouldn’t start!
We tried kick starting it but no joy; we tried bump starting it down the short slope of the campsite but no joy! So off came the seat and the jump leads came out but again, nothing doing!

All very strange, then a fellow competitor turned up with a battery booster pack and it started straight away, I’m guessing the jump leads weren’t connected properly as it should have started just as easily (well it was pretty dark). So whilst Andy kept the bike ticking over, I bolted the seat back on and got kitted up (again).
All ready to go and the bike decided to stall as soon as I put it into gear!!!
Andy asked if I minded if he headed off, which was only fair so I set about unbolting the seat again and getting the jump leads out again.

This time it started easily and as it had warmed up enough not to need the choke, I used my trusty clothes peg to jam the throttle partly open and keep the bike running whilst I put everything back together, put the jump leads away, got kitted up again and locked up the van.
This time I got underway without problems and headed off down the A515 and a few issues were immediately apparent. Remember the problems the MOT tester had with the beam pattern of my LED headlights… I could see why!
It occurred to me that I’d only ridden the bike in the dark once before in Morocco on the Tuareg Rally. That had been along a virtually straight road to the petrol station 15km outside of Merzouga.
I recalled they chucked out plenty of light straight in front, in fact enough to clearly annoy every car driver coming the other way! Since then I had blanked off the top of the low beam to create a flat topped 'dip' beam.
Now this obviously worked as I didn’t seem to be having any impact on oncoming traffic, none of whom flashed me and although the light was nice and bright, the beam was pretty much just a “blob” of light in front of me. Great in a straight line but not great for sharp bends where I really needed a wider spread of light.

It was a bit better on main beam (i.e. both LEDs illuminated) and to be honest I could maintain the 50 mph speed limit but certainly no faster.
Also when trying to get the bike started I had worked up quite a sweat, which despite my several layers was now cooling rapidly and making very cold.
The other problem was my road book; I had added instructions for the trip to Tamworth and before the event had thought of how to illuminate it for the night session.

The obvious solution was to buy the LED lighting strip from F2R designed for just that purpose and which simply plugs inside. But of course I’d have to order that from Portugal and I’d left it too late!

The other alternative that I had read on an LDT forum was to use chemical glow sticks inside the holder, I had one of those so all sorted, or at least so I thought!
I did think of testing it out before the trial but as I only had the one, I didn’t want to use it. Yes I could have ordered more but again I left it too late! As it was it turned out I activated it before leaving only to find it produced a very dim glow behind the road book, totally useless! I then remembered I had a second glow stick in my first aid kit.
And you guessed it… a marginally brighter but still very dim glow that still made it impossible to read the road book!

Oh well I had memorised the route (as I had decided to ride the trial route in reverse to familiarise myself with it) and then back again as far as the first checkpoint at Carsington. I had also driven half the route on my way to Pomeroy so no great problem.
Around Alrewas, I started seeing signs for the National Memorial Arboretum and temporary signs for the Ride to the Wall (RTTW) and realised it was the next day as it generally coincides with the date of the Edinburgh.
Last year the Edinburgh had run in appalling conditions and I remembered the torrential rain on the RTTW, the very first of my Sixty by Sixty list and the first time I’d ridden a motorbike following my diagnosis with myasthenia.

I had only got through that day on a combination of medication, sheer bloody will power and the comfort of my heated jacket! Sadly the EXC doesn’t produce enough electrical power for luxuries like that! 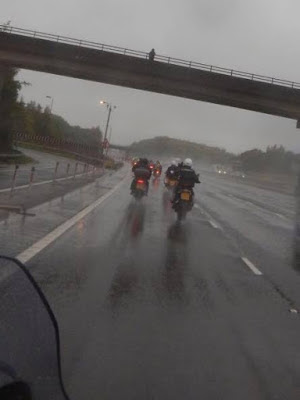 The weather last year, shared by the RTTW and the Edinburgh Trial!
Passing the roundabout at the entrance to the National Memorial Arboretum, the signposts said Tamworth was only eight miles away and straight on but I knew the route turned right and switched to minor roads here.

Almost immediately I found the navigation tricky as the “road” was indistinguishable from a couple of farm tracks leading off and despite stopping and checking the OS Map on my phone, it wasn’t clear. So I decided to back track to the roundabout and follow the road signs to Tamworth. In fact when I later checked the map properly I had taken a wrong turn.
This way was straightforward until I was just riding into the outskirts of town with about three miles to go when the bike started to shake and weave around. My first thought was a puncture but a quick stop to check and both tyres were fine! I pushed on keeping the speed to under 30 mph until I eventually pulled into the services.
Immediately the problem became clear, a rear wheel bearing had collapsed resulting in several inches of sideways play in the wheel. There was no way I could continue so sadly had to accept that my first attempt at the Edinburgh Trial was over before it had even started!
Upon arrival at Tamworth Services
This was particularly annoying as not only had I checked the bike over fully before loading it in the van the night before, it had of course only just passed an MOT less than a week previously.

I went inside to the sign on desk to declare myself as a non starter and then decided to get a coffee before calling out the RAC. I spotted another friend, Richard who was competing on his KTM 990 Adventure and was explaining what had happened when a car competitor on the next table offered me a lift back to the pub.

His friend (another Tony) had brought him and his car to the event and was going to the pub to wait it out before taking him home again but didn’t actually know where the Duke of York was. So in exchange for navigating I got a quick recovery back to my van on his trailer.
As it turns out this may have been very fortuitous as I discovered another competitor later had a puncture on the course and waited five and a half hours for the RAC sat at the side of the road at the exposed Pym Chair.

OK a similar wait in the services would not have been as bad but I’m glad It didn’t come to that.
To be continued…