Life with Myasthenia Gravis continues and as I recover after my heart attack things definitely seem to be improving.

I'm guessing this has a lot to do with the fact that i'd obviously been suffering from the blocked artery for some time even though I didn't know it and that in itself must have exacerbated my myasthenia symptoms. Since having the stent fitted the (admittedly slow) improvement has been noticeable.

I still have good and bad days but the bad days seem to be fewer and those symptoms I do still get seem to be lessened and less frequent so all good. It is also likely my medication is starting to settle things down too.

Having received my new licence back from the DVLA and taken my bike out and coped OK, I thought I needed to book some duties with SERV OBN Blood Bikes as an experiment to see if I could survive a duty or two and still contribute as a rider member. 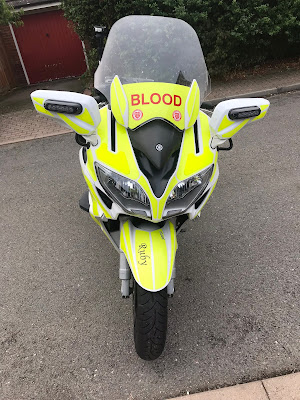 My first thought was to book some day time only duties but in the event I had to work with what was available on the rota, so booked for last Friday night into Saturday morning and the Saturday day time duty (21st and 22nd December).

So having had Yamaha FJR1300 fleet bike "Ruby" delivered on the Thursday, seven o'clock came around on Friday evening and I clocked in by text but the phone didn't ring. Come eleven o'clock and I'm thinking of going to bed as I might get a call in the early hours but in the event I was still awake when the inevitable call came just after midnight. I had been preparing for this by continuing to take pyridostigmine into the evening. This is the drug I take to improve neuromuscular function and is required every four hours, with a very noticeable effect as it runs down.  My last dose is usually around six or seven o'clock as I don't normally need it through the night but this evening I continued and took some around 11.30. this was fortuitous as it takes 20-30 minutes to kick in so was working well as I set off.

The run was for a blood sample for cross-matching from Northampton General Hospital to the Blood Transfusion Service in Birmingham. A long run so my controller asked if I needed to rendezvous with Warwickshire and Solihull Blood Bikes (WSBB) at Junction 2 of the M6 so they could complete the run. I decided that given my circumstances, this would be a good idea and asked if this could be requested but said I'd be happy to run all the way to Birmingham if I had to.

I set off under cloudy skies and it was relatively warm and dry but sadly that lasted all of five minutes! I was rolling down the slip road onto the A5 north bound, when the monsoon started!!!

The rain was of truly biblical proportions, I genuinely considered stopping under one of the bridges, visibility was so bad. The only positive was my waterproofs are excellent and my heated jacket and Ruby's heated grips were doing their jobs. So I persevered and by the time I reached the Old Stratford Roundabout and turned onto the A508, the rain had stopped. I had to contend with wet roads and lots of standing water and the occasional shower for the rest of the night but thankfully it was never as bad again.

Arriving at Northampton General, I collected the sample and got the news I could hand over to WSSB at the Tesco Extra just off Junction 2 of the M6 near Coventry.

Setting off up the M1 and M6, I just set the FJR on cruise control, turned on my heated jacket and the grips back on and settled into the ride. I find riding through the night quite enjoyable and this was no different, near deserted roads are a refreshing change in this day and age. I eventually rolled into the car park at Tescos around 2.00am and handed over to Chris, who was waiting in WSBBs marked car... no roughing it on a bike for him!

A trip into a strangely deserted Tescos to use the toilet and to grab a snack and drink to keep my energy levels up,  I checked in with Malcolm, my controller who confirmed there was nothing else for me and then set off on the long journey south and home. Arriving just before 03:30 I again checked in with Malcolm and in the absence of any more jobs climbed into bed for some much needed sleep, safe in the knowledge I was unlikely to be called again for a few hours as our procedures do require a minimum rest period after a late night run.

My day time controller, Paul checked in with me around ten o'clock but had no jobs at that time and it continued that way through the day until after lunch...

Around two o'clock I was notified by Paul of a non urgent transfer of platelets from the Blood Bank at the John Radcliffe Hospital in Oxford up to Kettering General Hospital that would be ready for collection at five o'clock. Now the only issue was the fact that this is a four hour round trip so there was no way I'd be finished when my duty ended at 7.00. I was due to be handing the bike straight over to Robert, the next rider on the rota, so made arrangements to ride straight to his house from Kettering and he could then give me a lift home as this would only take about 20 minutes. Ian the controller for Saturday night was appraised of the plan and all was set in motion.

At four o'clock I left home for a leisurely ride to  Oxford, collected the platelets at 4:50 and then headed off for the 90 minute ride to Kettering. Thankfully traffic was light and the roads now dry so I was able to reach Kettering in only 70 minutes. The only negative part of the ride was the blind Audi driver who decided to pull straight out in front of me at a roundabout on the A43 at Brackley and then when he realised his mistake, did exactly the wrong thing and stopped in the middle of the roundabout! Luckily I had seen him approaching the roundabout too fast to stop easily so predicted what he was about to do and was already braking to a stop as he pulled in front of me, so no real drama! But I'm still not sure how he could miss a bike that is lit up brighter than the average Christmas tree! 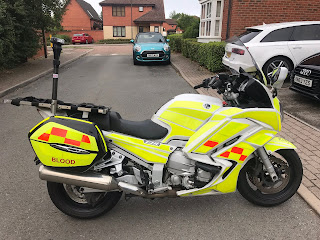 The view he would have seen!

Even in daylight it's hard to miss

After the drop off, it was a swift ride back to Robert's house, dropped off the bike and jumped in his car and I was back home at eight o'clock, only an hour after I was due to be off shift so no real problem.

So how did I stand up to this? It's fair to say Sunday was a bit of a wash out, feeling very fatigued and my neck muscles especially were very sore. Knowing this to be a potential problem as I hadn't worn a crash helmet for any length of time since August and myasthenia tending to affect my neck muscles in particular, on Friday night I had worn my BMW GS Carbon helmet as it only weighs 1200 grammes. However having a peak, it isn't very compatible with the screen on the FJR causing a lot of buffeting and noise.

So on Saturday I swapped to my Schuberth E1, this also has a peak but it can be removed in seconds and is a lot quieter on the FJR as a result. The downside is it weighs 1750 grammes and you can certainly feel the difference and no doubt a major contributor to the sore neck muscles.

So it seems I can successfully survive a blood bike duty (or two) but for future duties, I think I'll try and stick to day time shifts on weekends or bank holidays and this will also give me a suitable rest period in between rather than doing consecutive duties. And I'll stick to my carbon fibre crash helmet and put up with the noise!

Onwards and upwards as they say, so on Monday by now feeling a bit better I rode my KTM 1090 Adventure R to work for the first time since August, no drama although the forecast was for a dry, warm day with temperatures around 6 to 7 degrees. No such luck as the warmest I saw it on the way in was 2 degrees, as always I was grateful for heated grips and my heated jacket!